After the PPA signing took place on 2nd November 2016, eab New Energy GmbH carried out the cornerstone ceremony for the Iranian wind farm project „Orientwind“ together with its partners and more than 100 invited guests from politics and business community on 8th December 2016. 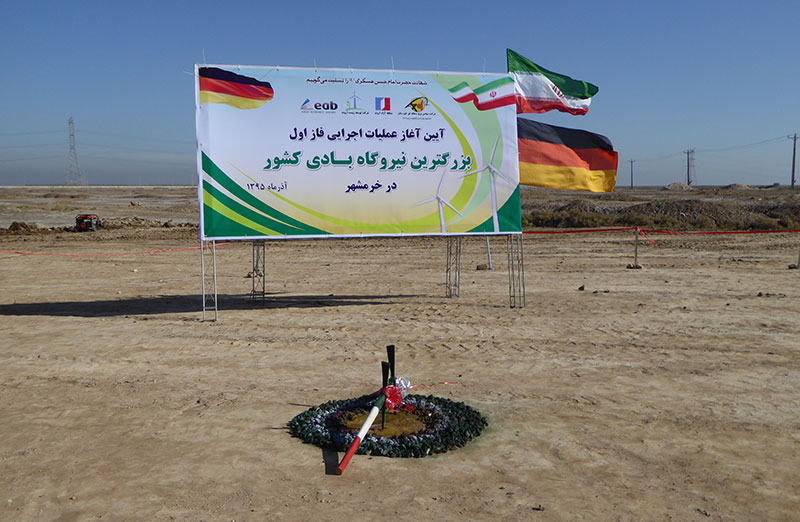 The wind energy project Orientwind includes the construction of 14 plants of the type 3.4M122 from the manufacturer Senvion with a planned hub height of 119m. The site is located in the Arvand Free Trade Zone, near the city Abadan in the province Khuzestan.

From the 8th to 10th November 2016, the Wind Energy Days, organized by the German company Spreewind GmbH, celebrated its 25-year anniversary according to the motto “Mighty powerful” and were sold out again with more than 1,700 exhibitors. 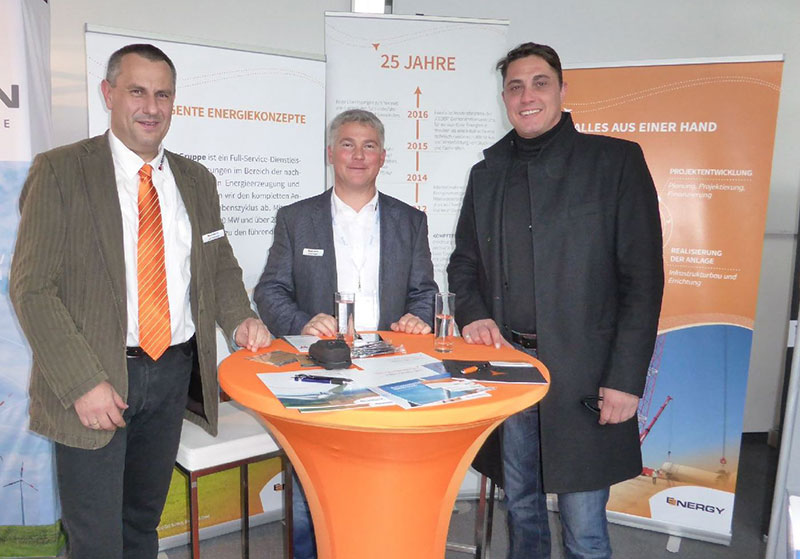 Within the internationalization strategy, eab New Energy enters into an important partnership with green[::]match.

green[::]match is the leading investment application for renewable energies. The highly flexible application displays the complete financial project life circle of wind, PV, hydro or biomass projects and optimizes the workflow.  Projects can be analyzed and implemented more efficiently, comprehensibly and reliably by the cooperative and integrative approach. 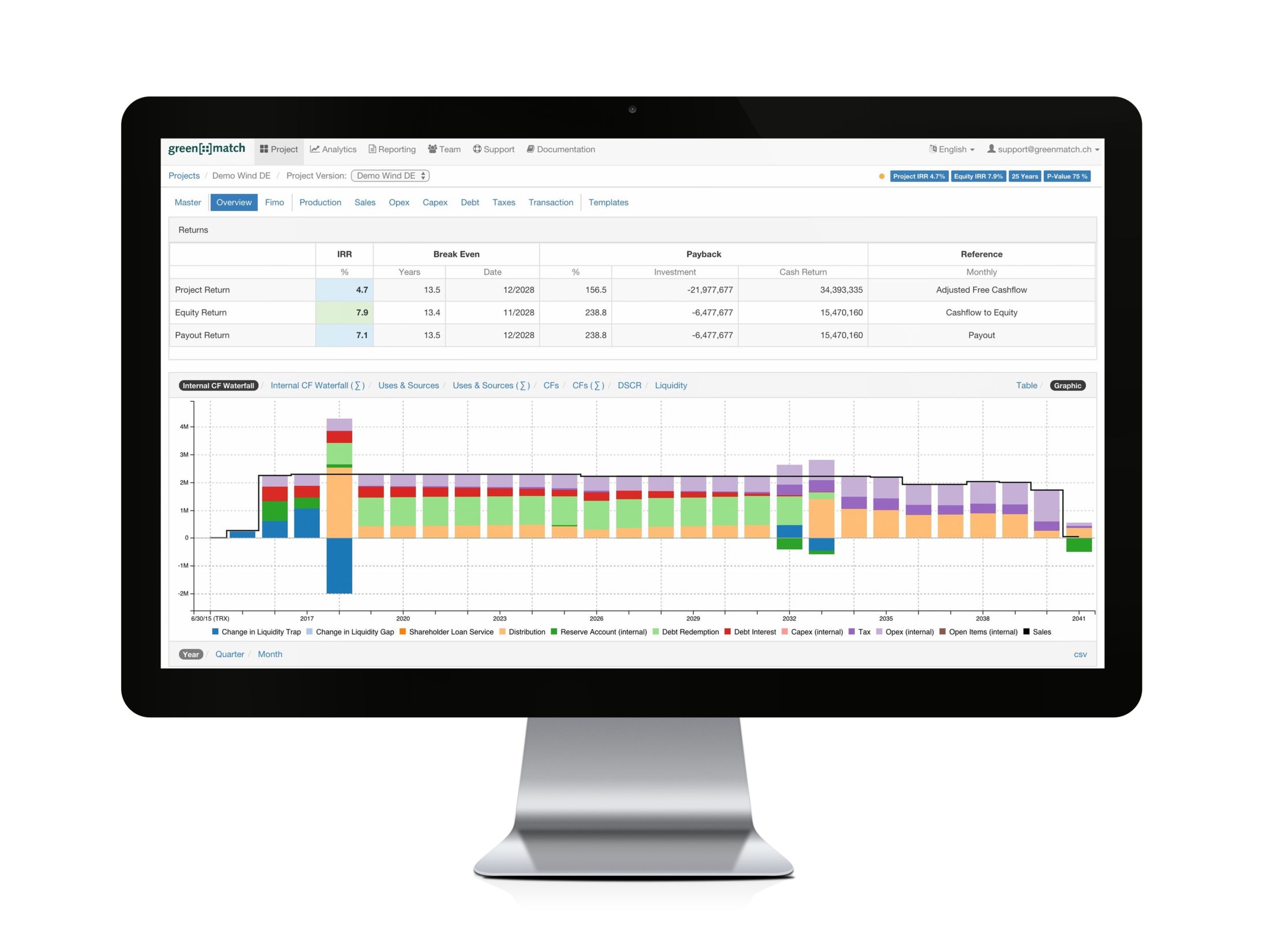 With eab's technical and regulatory expertise, green[::]match can address the non-European market characteristics even more intensively.
The global applicability and flexibility of the financial modeling platform in the highly dynamic renewable energy market can be secured better and it results in a profitable and promising cooperation for both parties.

In coordination with the teacher of the class 3a, Miss Klauer, the field trip led the pupils of the elementary school „Frédéric Joliot-Curie“ to a visit in the wind farm Pegau ll.

The pupils were welcomed and accompanied by Mr. Rudolph, operating manager at Heliotec Betriebs- und Verwaltungsgesellschaft mbH which has been conducting the operating management of the wind farm Pegau ll since its commissioning in 2009. 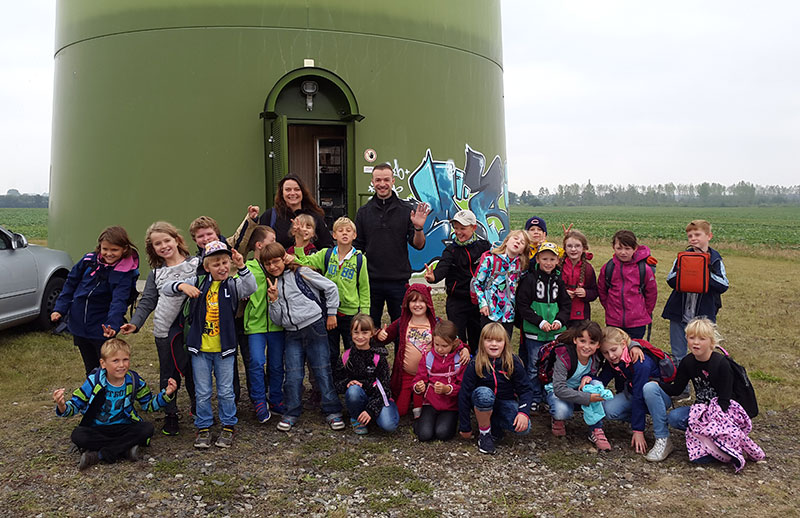 25 years in the service of using renewable energies

Shortly before the meteorological beginning of autumn, the summer was at its best on Saturday, 24th September 2016 and the old and young had an unforgettable party at the headquarters of 3Energy in Großschirma.

With numerous employees, cooperating companies, partners, families and friends, we toasted to the opening words of Dr. Klaus-Dieter Lietzmann and the honoring words of Mr. Frank Jänisch, head of the building authorities of the city of Großschirma, and celebrated to the wind music of the "Rechenberger Blasorchester". Multiple congratulations and presents were given to the management of the company group, especially the managing director and co-founder of 1991, Dr. Klaus-Dieter Lietzmann. 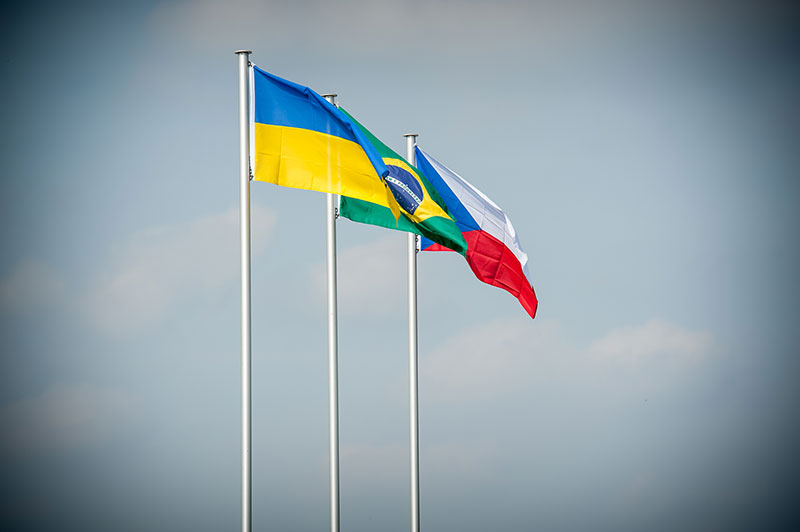 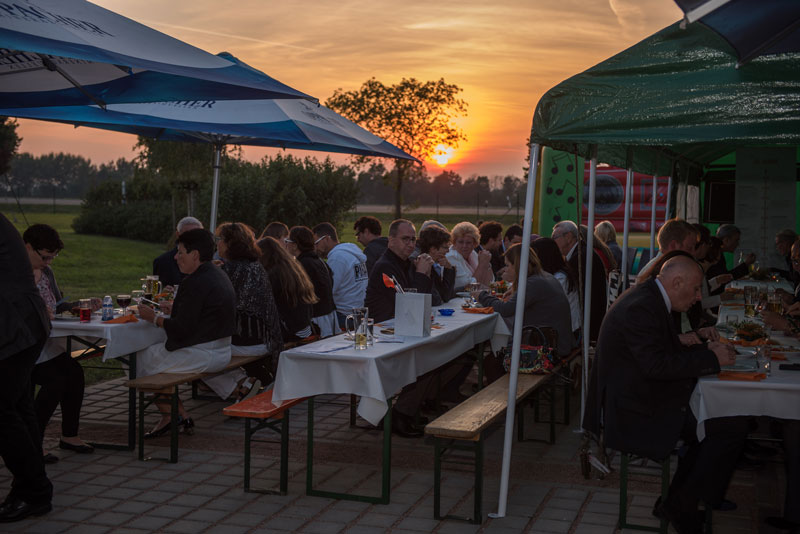 After all, long before the German renewable energy law came into force on 1st April 2000 for the priority of renewable energies and politicians appealed to a stronger use of hydropower, wind and solar energy, 3Energy already put  those ideas to practice. The 25-year success story of the 3Energy company
group has been linked to the concept of achieving an independent energy supply since the beginning.
Despite the modest start and some reluctance against the use of renewable
energies in the general public, the awareness that renewable energies are an important and integral part of the energy supply in the future has now won
recognition worldwide.

With up until now 500 MW of erected wind and solar plants and further 200 MW being currently realized, the company continues to grow and consistently opens new business fields with innovative ideas in the green energy sector.

Groundbreaking Ceremony for the wind farm “Mui Dinh” in Vietnam

After a development time of 5 years and many negotiations, the foundation for the wind farm “Mui Dinh” in the Ninh Thuan Province was laid on 30th August 2016.

During the celebratory ceremony, the vice-governor and the party leaders emphasized the importance of this first wind farm for the region to have a pioneering role in the People’s Republic of Vietnam. Andreas Lietzmann, CEO, confirmed the great interest and desire of our company to pursue further projects for the renewable energy production in Vietnam. There are currently 2 concrete plans in preparation.

Video from the event

The overall project “Mui Dinh” comprises the construction of 16 wind turbines of the type E92 with a hub height of 85m on a surface of more than 10 ha as well as a 40 MVA sub station and approximately 12.5 km of a 110 kV transmission line to the grid connection point. The wind turbines are provided by the German company ENERCON GmbH. The wind farm shall be connected to the grid with a total rated output of 37.6 MW until the end of 2017.

The 3Energy Company Group financed the project development and is currently in talks with banks and investors to complete the commissioning of the wind farm with an expected total investment volume of approximately 64 million USD until the end of 2017.

The company group donated $10,000 for disabled and poor people from the district at the event.

After a construction period of 6 months, the wind turbine of the type N117/2400 of the
well-known plant manufacturer Nordex was successfully put into operation in Pfaffengrün/Treuen on 29th August 2016.

The newly constructed wind turbine with a capacity of 2.4 MW, a hub height of 141m and a rotor diameter of 117m will annually feed 7,100,000 kWh of electric energy into the medium-voltage grid of the grid company “Mitteldeutsche Netzgesellschaft mbH” (MITNETZ). In terms of figures, the wind energy plant could supply more than 2,000 households with “clean” energy.

The plant was erected not far from the motorway junction Treuen, located directly on the A 72 and not only stands out with its dimension but with its special tower design of the company Ventur GmbH.
This innovative so-called “Drössler Tower” with its pre-stressed prefabricated construction method, in which the tapering wall elements are installed vertically offset in modular design is characterized by its elements, commonly only 3m wide and 10m long, that can be transported to the construction site cost-effectively and with a low logistic effort.

This wind power project was developed and implemented by eab New Energy GmbH in cooperation with the general contractor 3E technology GmbH. 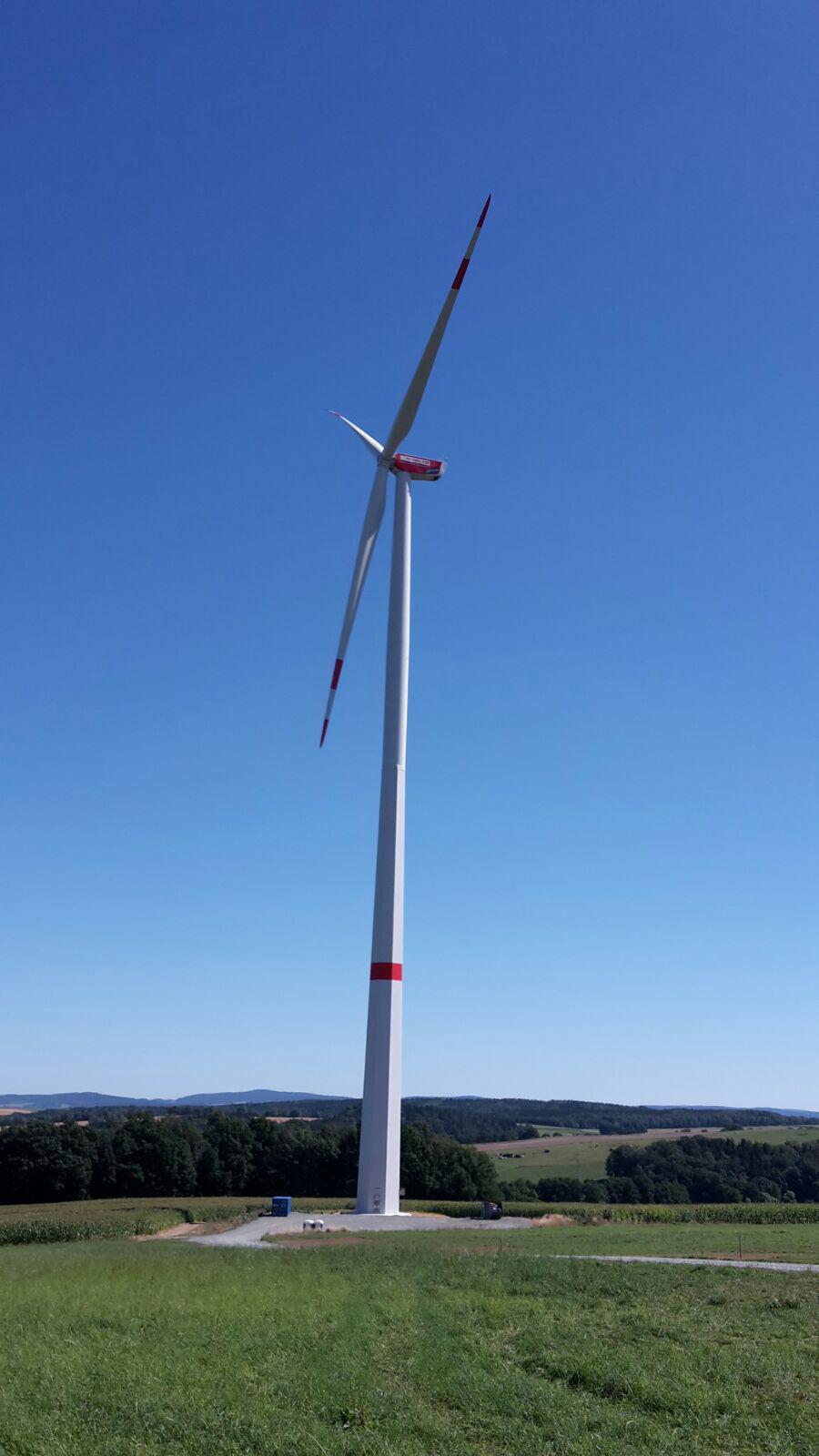 Successful Certification According to ISO 9001:2015

In order to maintain and improve our quality level, we decided last year to introduce a quality management system according to ISO 9001:2015. We thoroughly analyzed, restructured and documented all operative processes. The intensive analysis with this topic affected the development of our company in a positive manner.

Since the establishment of our company 25 years ago, it is our primary concern to render our services with the best possible quality. After the tightening of the European guidelines, numerous manufacturers and customers demand proof for an audited quality management. With this certification, we prove to be a competent and reliable partner and strengthen the trust of our customers in our services and competences simultaneously.

Today, the certification document has been handed over to us by DEKRA Certification GmbH for our quality management according to ISO 9001:2015. 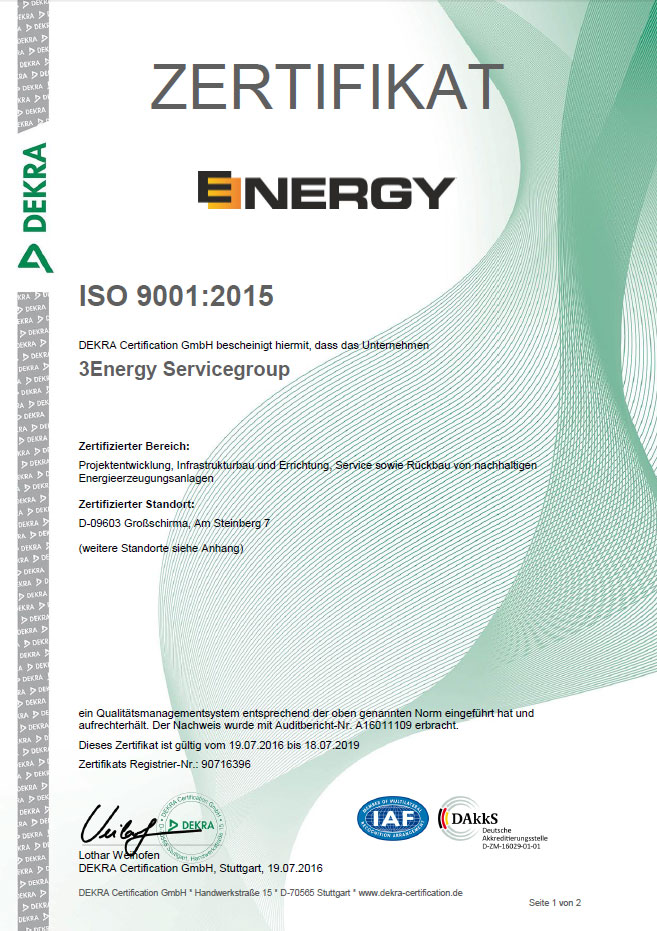 As in February/March 2016 at the 8th Iran International Renewable Energy & Energy Saving Exhibition, we represented eab New Energy GmbH at our own exhibition stand at the 4th Iran Wind Energy Conference in Tehran from 19th to 20th July 2016.

Besides the successful structuring and follow-up of collaborations with Iranian partners as well as discussions with various national and international suppliers and manufacturers, the representatives of eab New Energy GmbH were able to hold many constructive meetings. 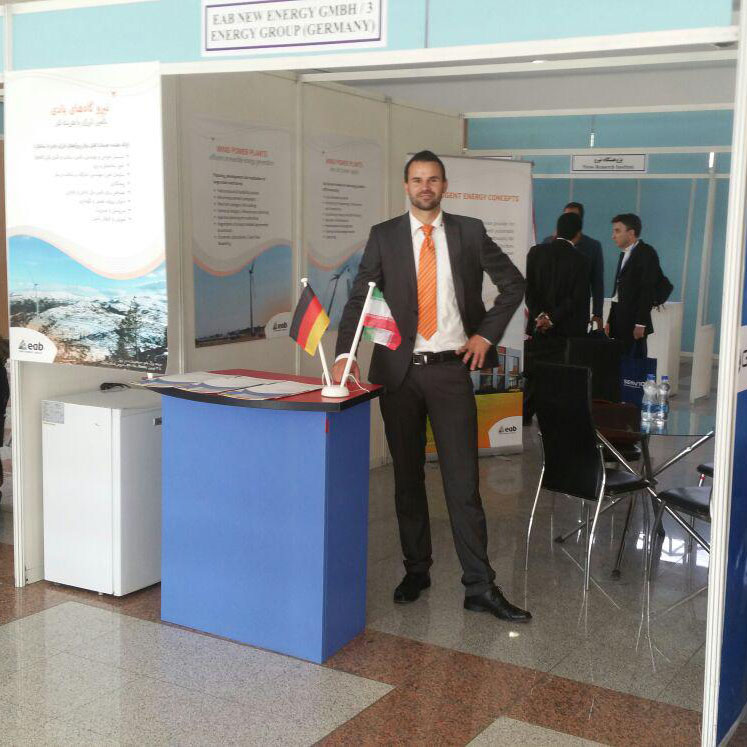 3Energy Company Group on board in Berlin

On 2nd June 2016 there was a large-scale demonstration, organized by the Federal Association Wind Energy (Bundesverband Windenergie e.V.) for saving the German energy transition in Berlin. We were present with about 30 employees and, together with thousands of fellow campaigners, took part in the demonstrative march from the Federal Ministry for Economic Affairs and Energy to the Brandenburg Gate. 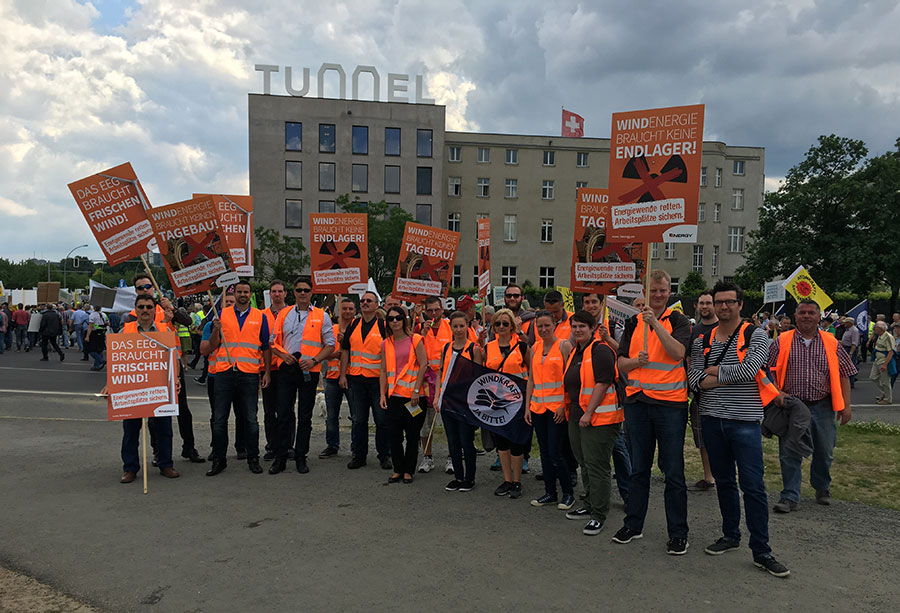 We can look back on a successful fair with lots of interesting meetings.
Within the framework of the energy trade fair IES 2016 in Tehran from 29th February to 3rd March 2016, we represented eab New Energy GmbH at our own exhibition stand. Due to economic transition triggered by political reforms, Iran is an attractive market for eab New Energy. The main focus of the fair was on the renewable energy sector and is therefore well suited for the market entry and establishing business contacts. 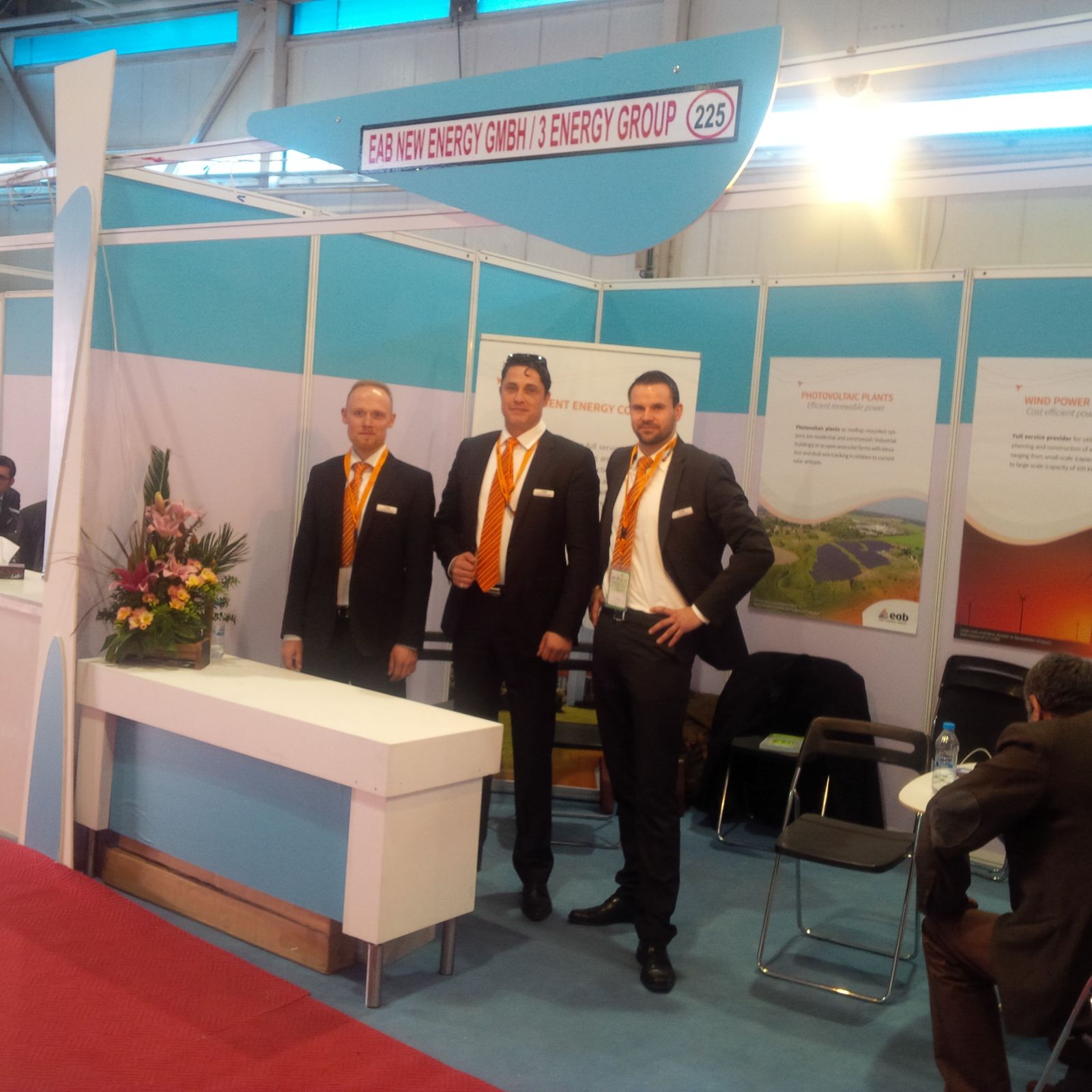